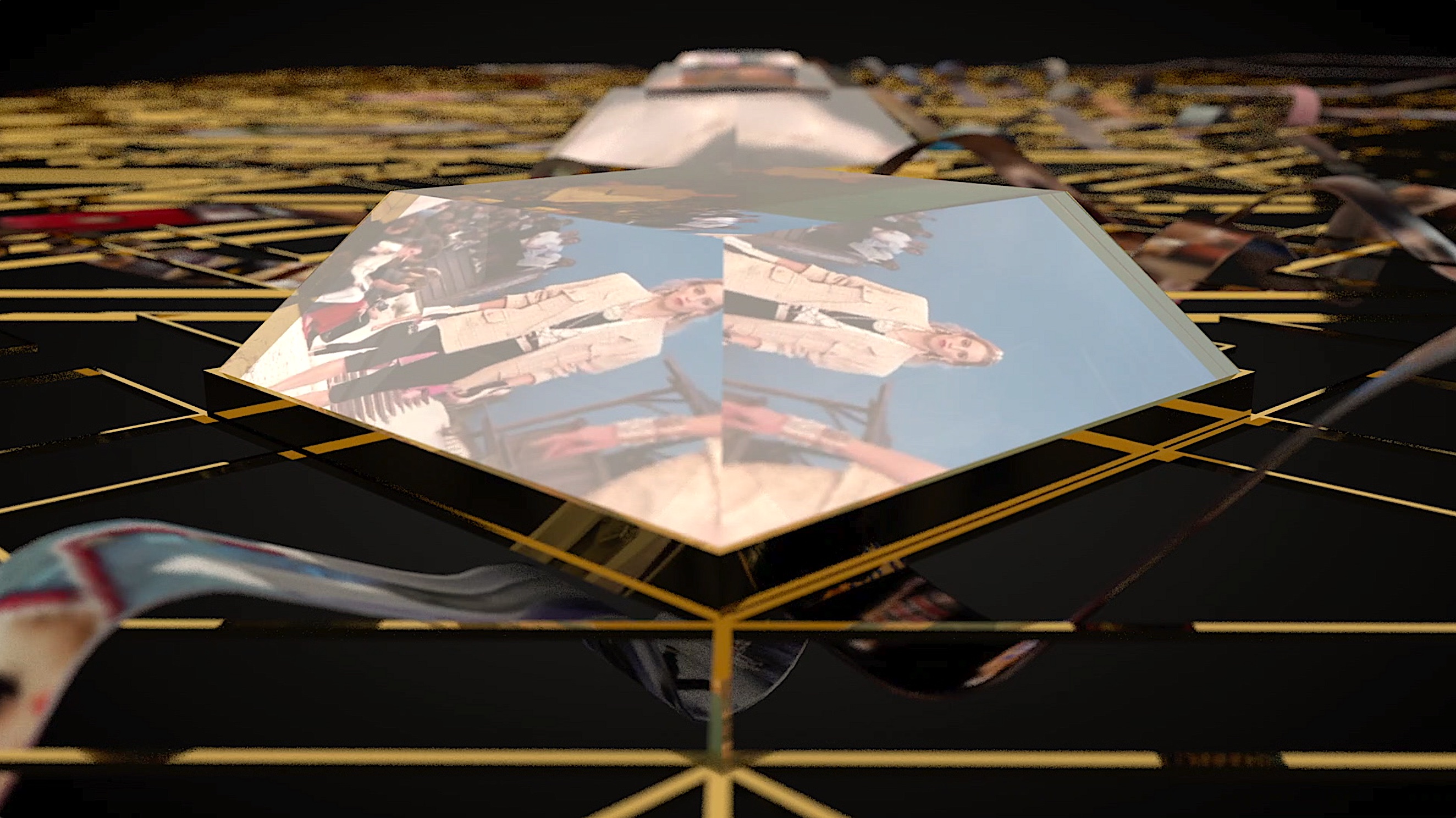 The goal outlined for this project was to develop a cohesive set of artifacts that tell the story of ones design hero.

Created over the course of one semester, I enveloped myself into the work and life of Karl Lagerfeld. Lagerfeld is most notably known for leading the helm of the most valued fashion houses.

Constructed out of hundreds of interlocking K's, the 'K Grid' was developed to maintain a common thread throughout all artifacts in this collection. While doing so, it embodies structure, identity, and reinterpretation—core principles to Lagerfeld's work.

Implementation:
The design system is inspired by the art of hand-done embroidery in the Haute-Couture collections. Text and Imagery are treated in this same manner as they are placed carefully on the K grid. Ultimately, this design system does away with the traditional grid system allowing it to be usable in any form of media. 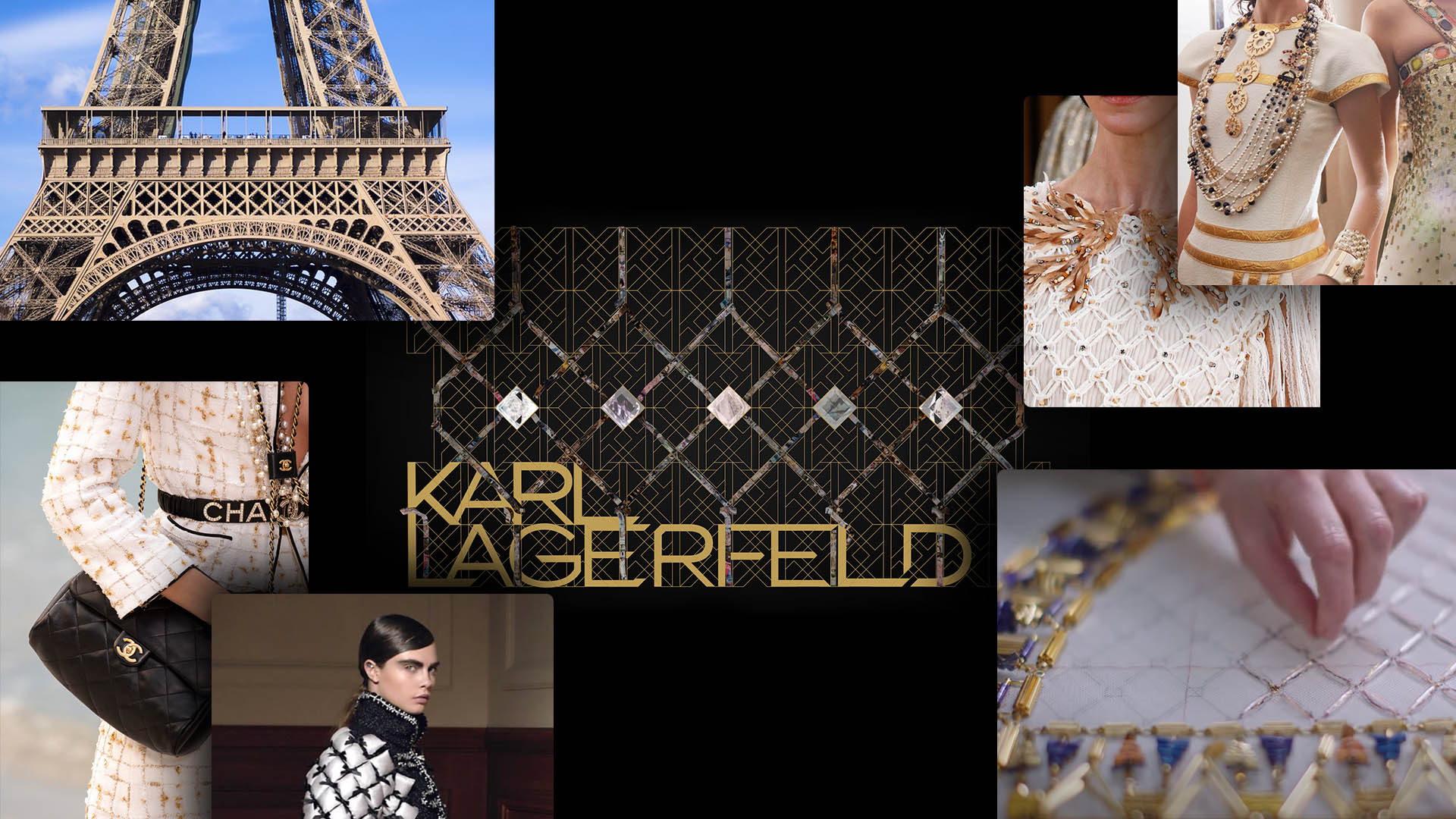 ↑Grid structure is inspired from the Eiffel tower (commonly referenced in his collections), embroidery, Chanel quilting, and the intricate layering of textiles.

Completed in the very beginning of this project, the poster reflects the first implementation of the K Design System. The goal of this poster was to summarize key milestones in Lagerfeld's design career. 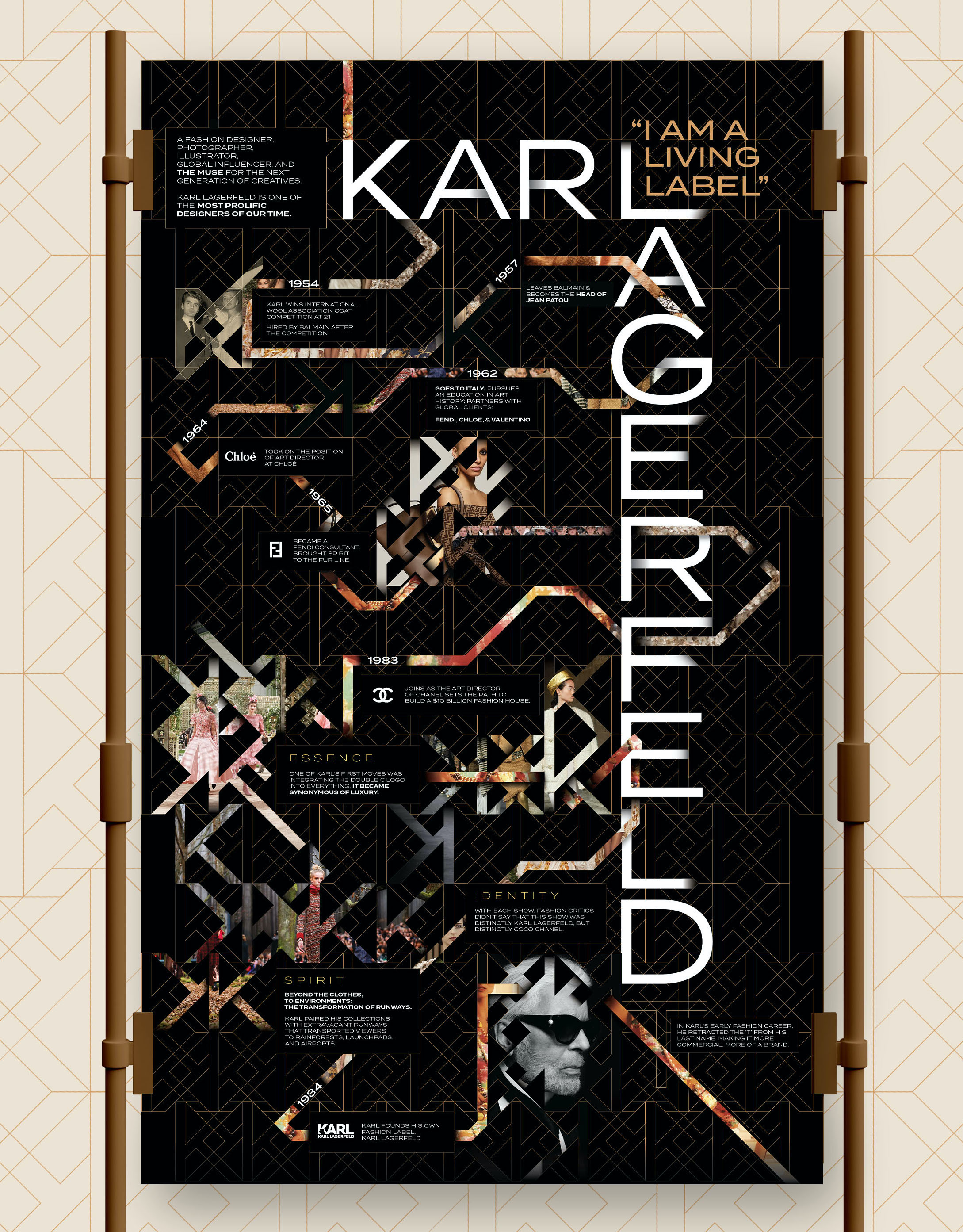 The booklet expands on the poster's timeline by detailing his impact in each fashion house. Each page was treated like its own look in a fashion show. Pages content vary in placement, size, and orientation all the while staying consistent due to the K Grid. 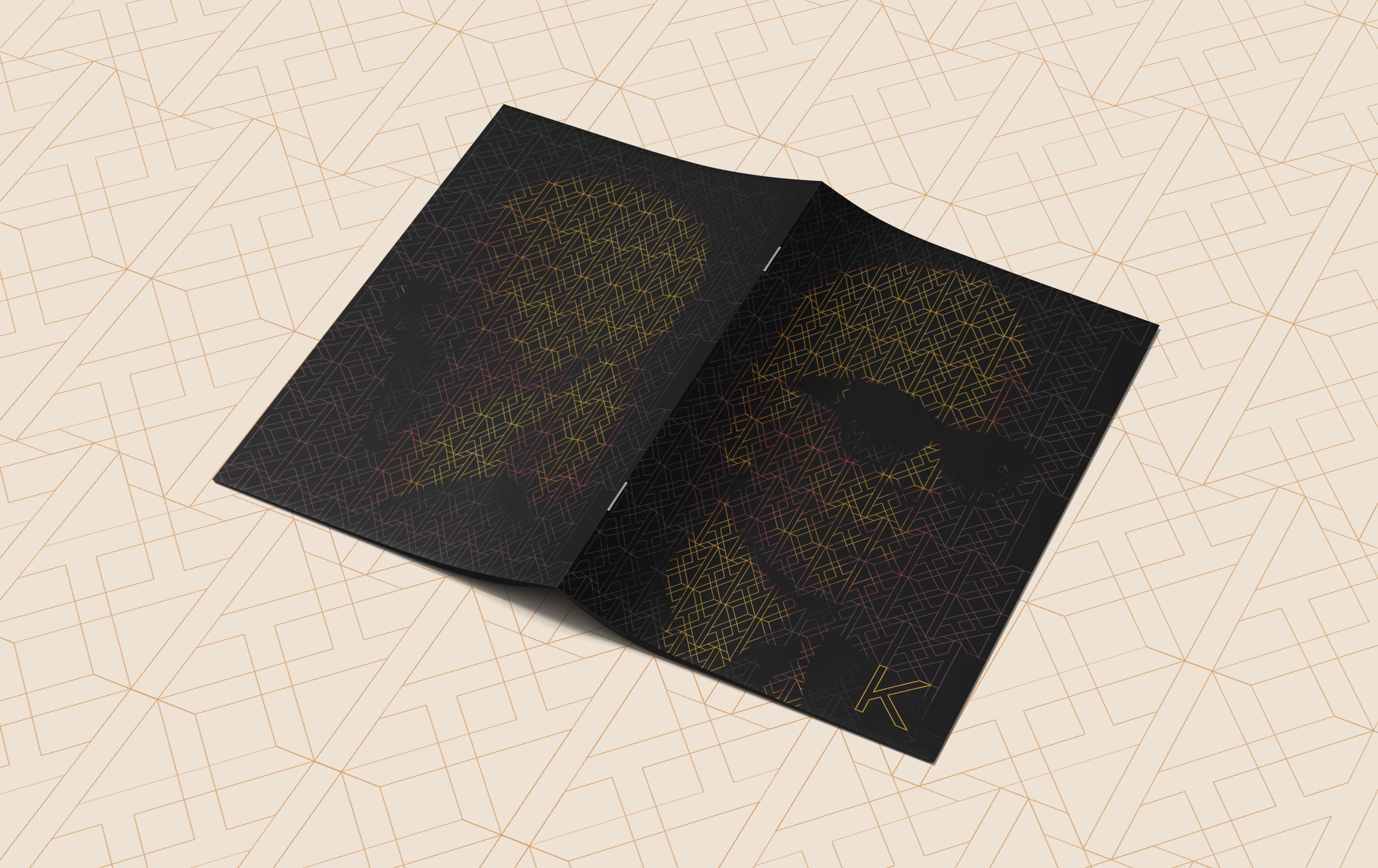 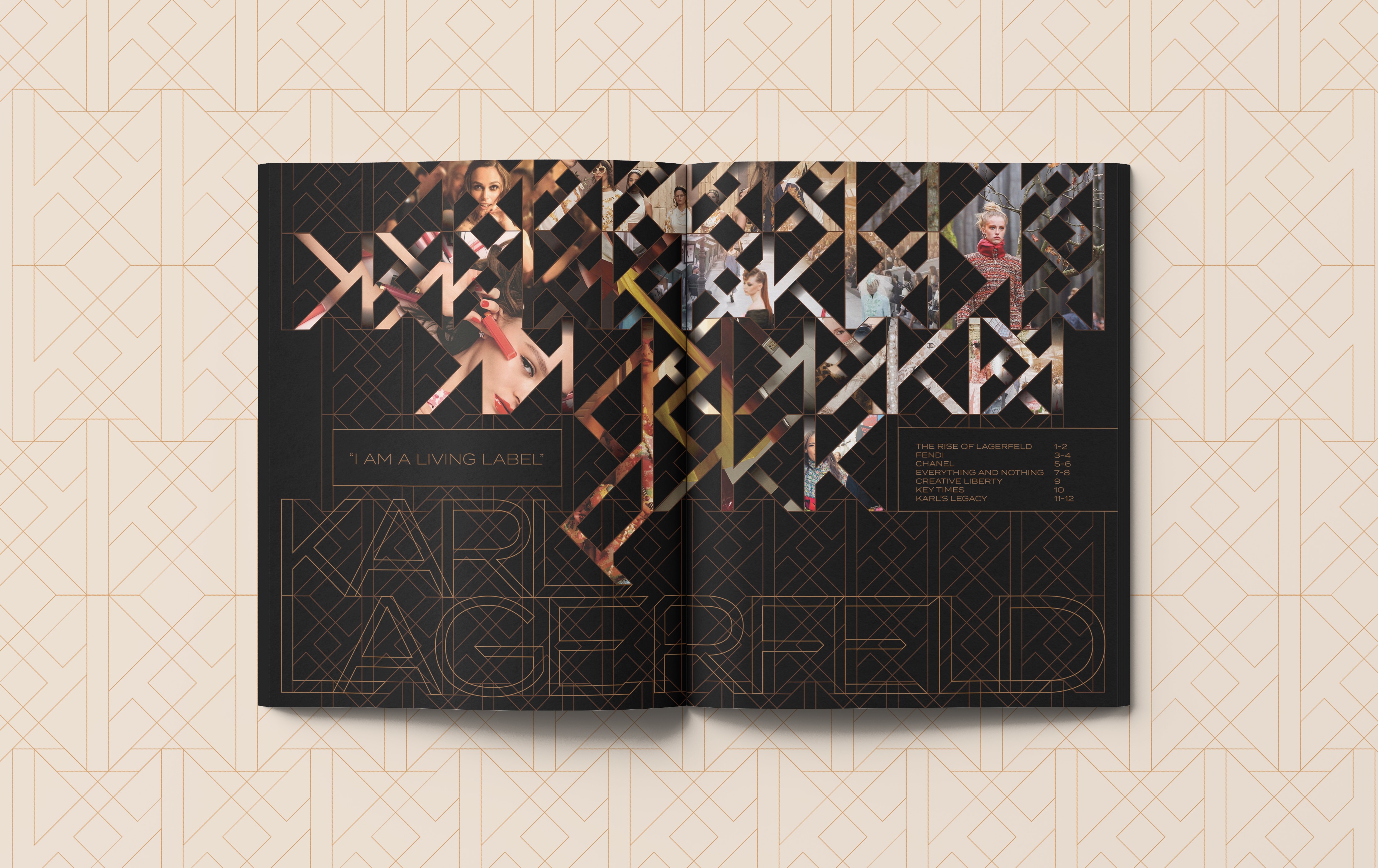 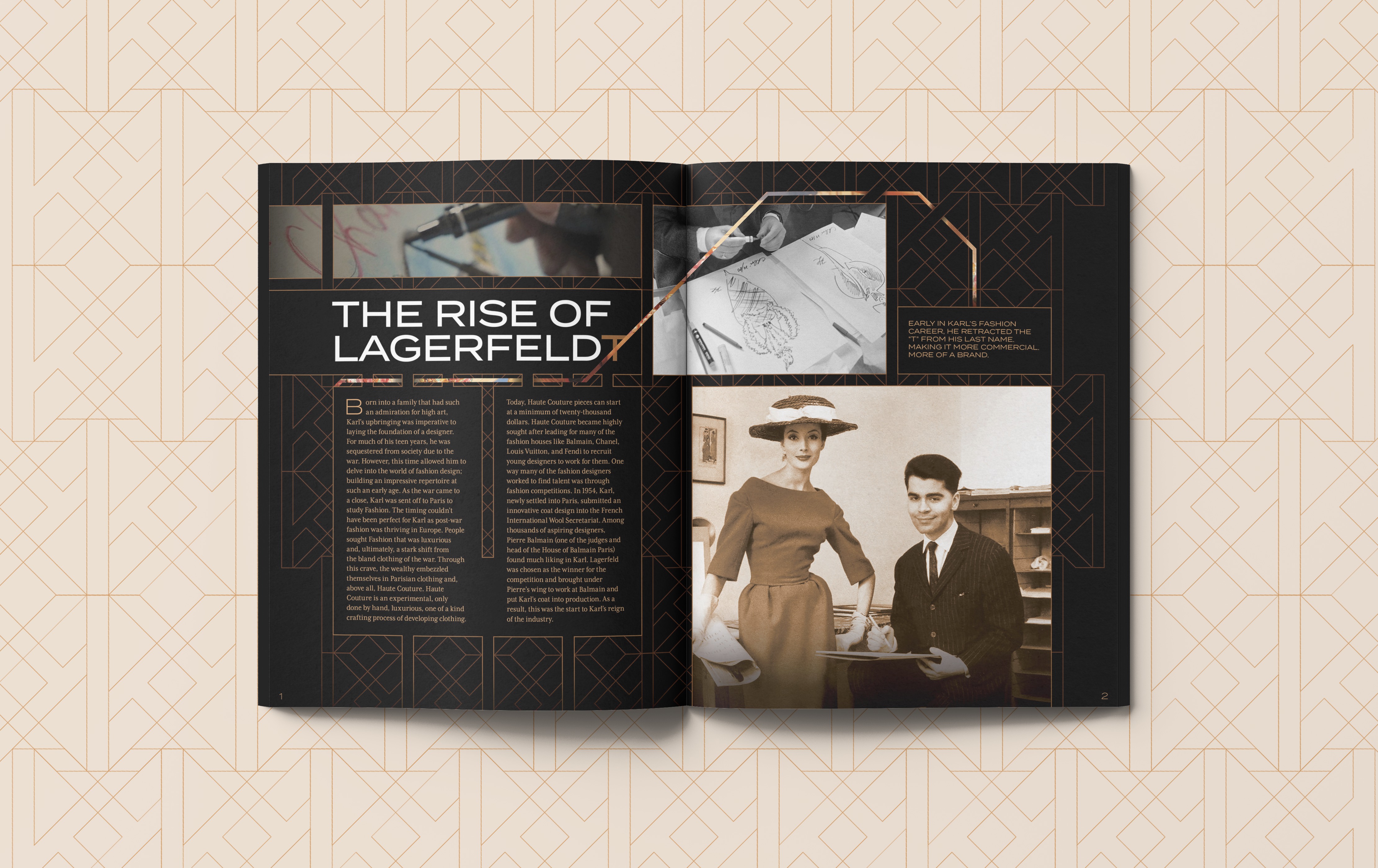 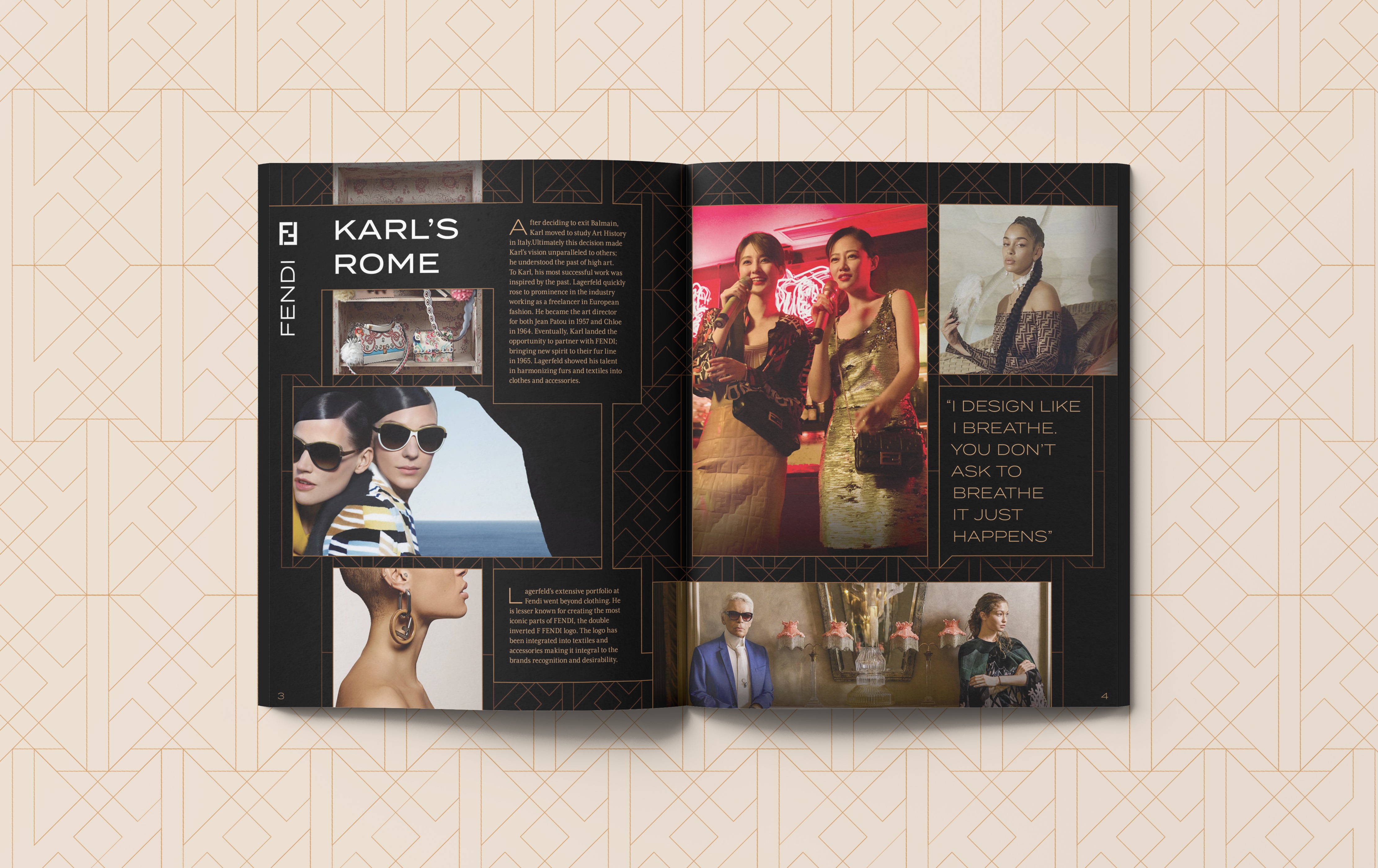 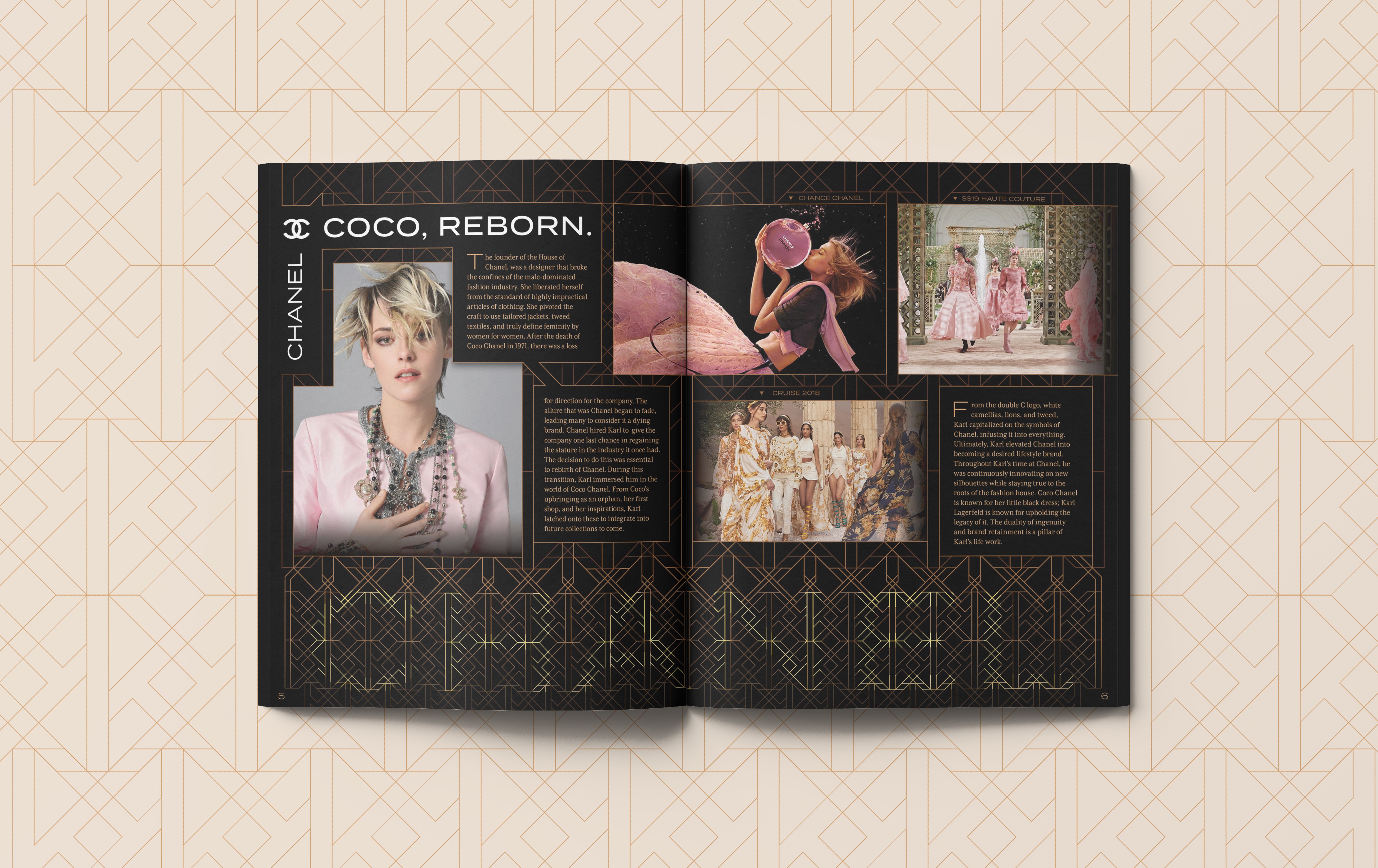 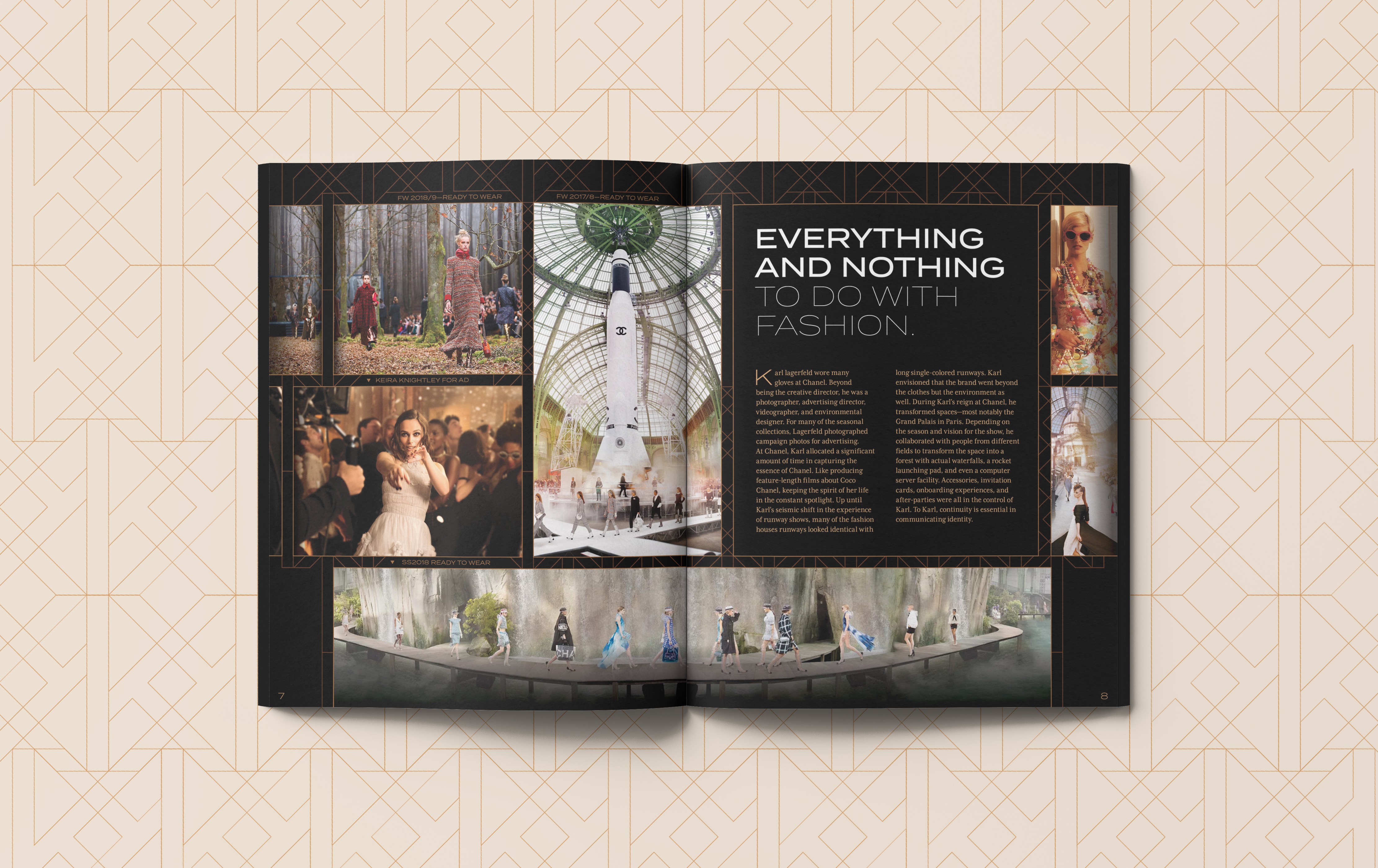 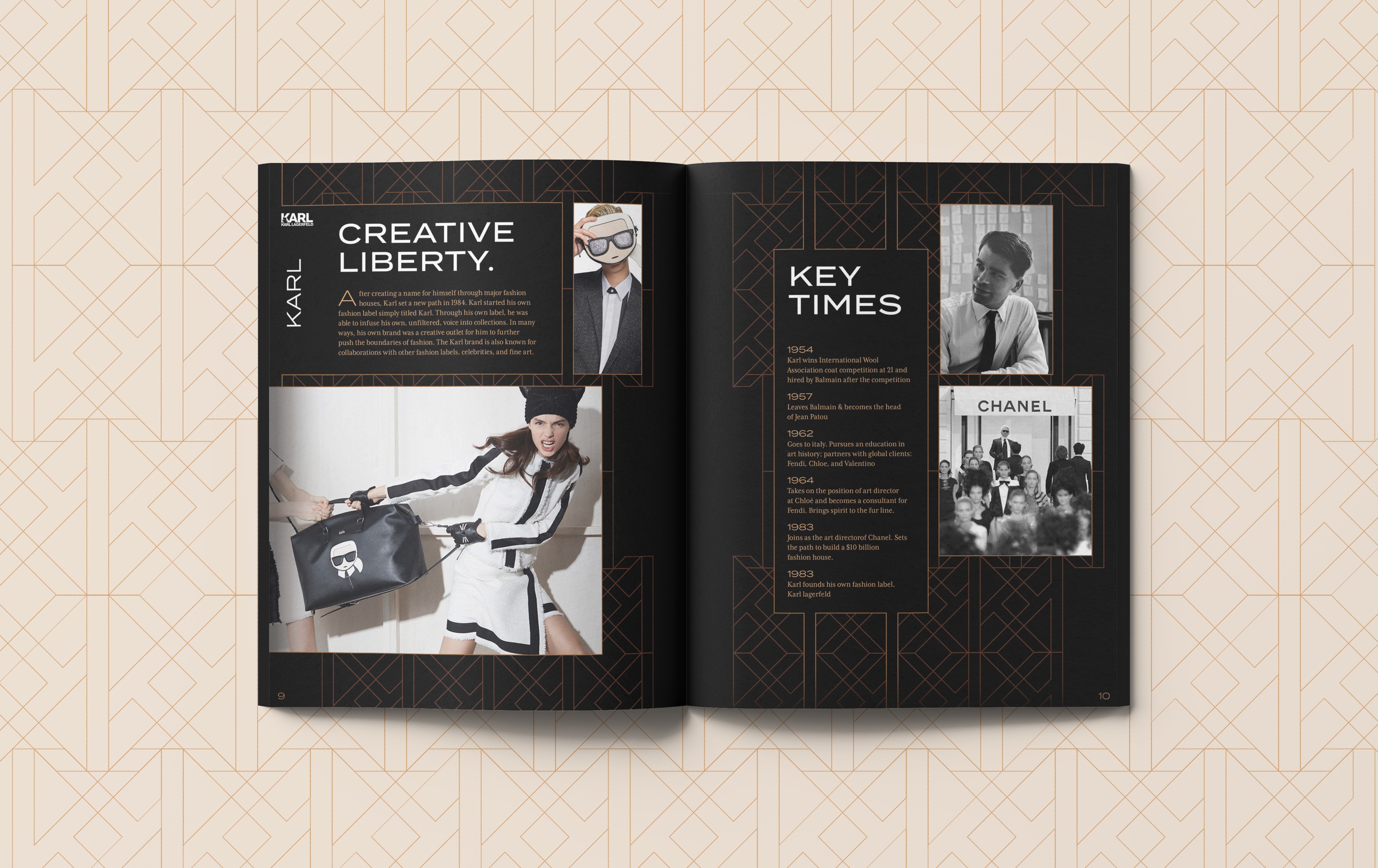 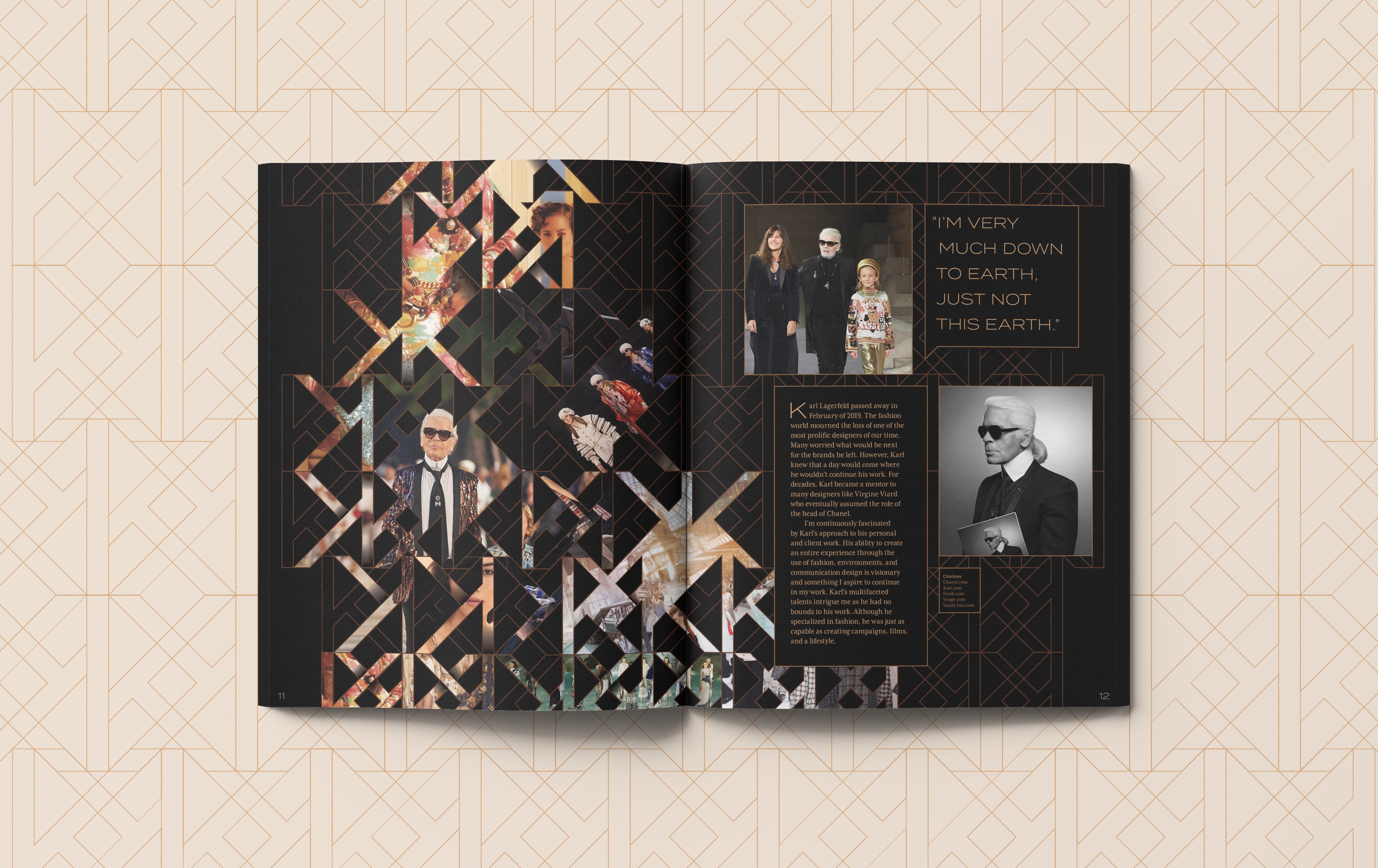 Created in tandem with the booklet, the KARL mobile application communicates an in-depth story of Lagerfeld's design values and achievements.

Rationale for AR:
As seen continuously in Karl's reinvention of Grand Palais to present his collections, space played an integral role in his work. As a result, I wanted to commemorate his use of space in AR. Turning the K grid into a 3D object allows user interact with his work and the design system in an entirely new way. Users can press on fashion houses logos to see more of his work. 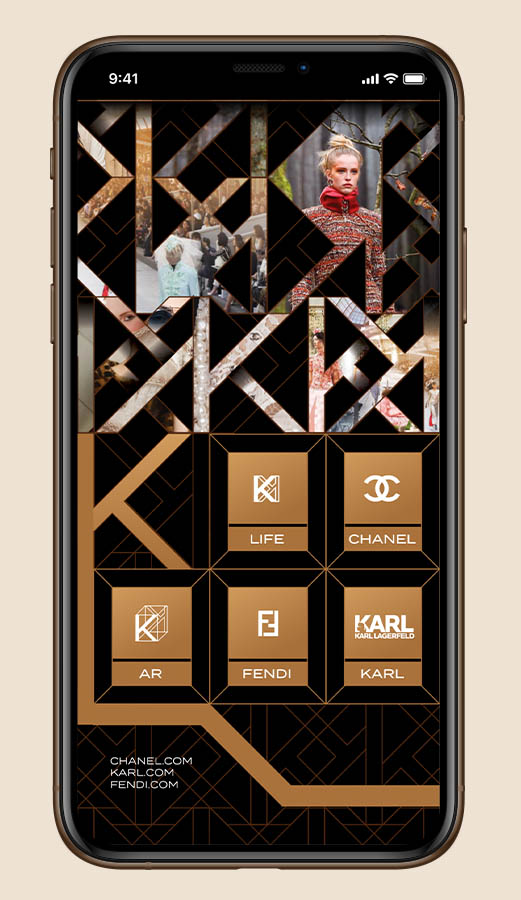 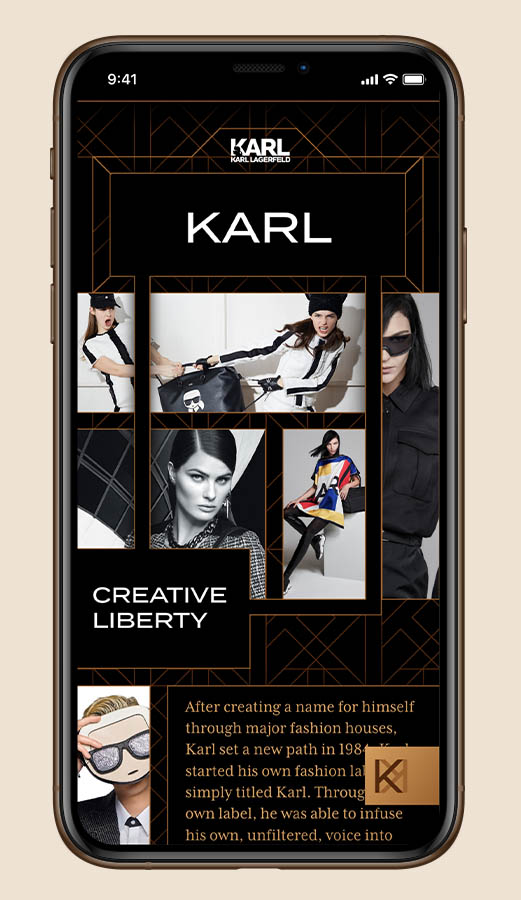 ↑ K grid on mobile
In the same manner as the booklet, content is placed on the K grid. Due to the affordances of the medium, content can slide in, under, and over the grid. Please view the demo to see this interaction. 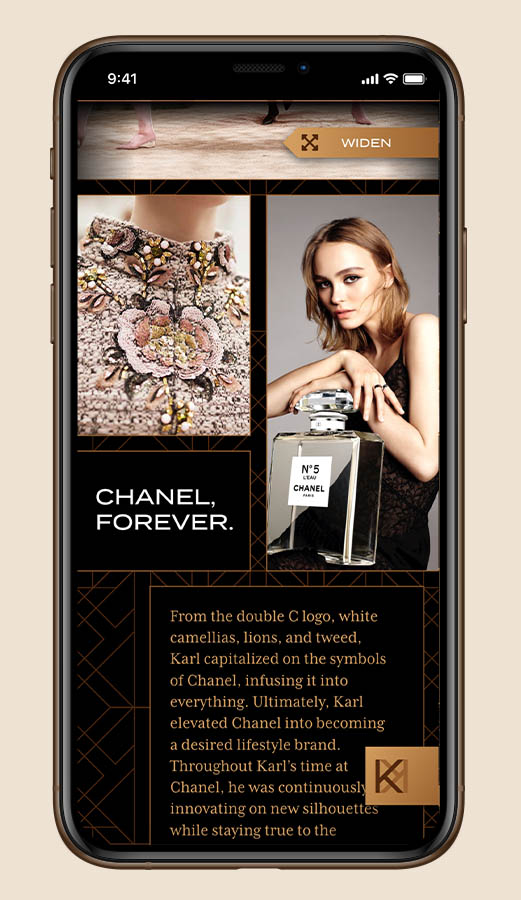 ↑Many Arrangements
The grid allows for never ending arrangements of text and imagery while still maintaining a consistent voice through the entire interface. 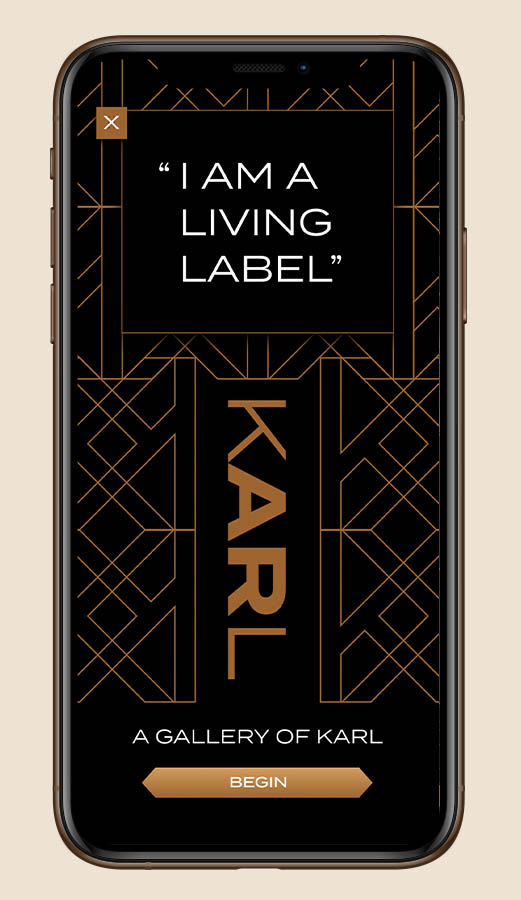 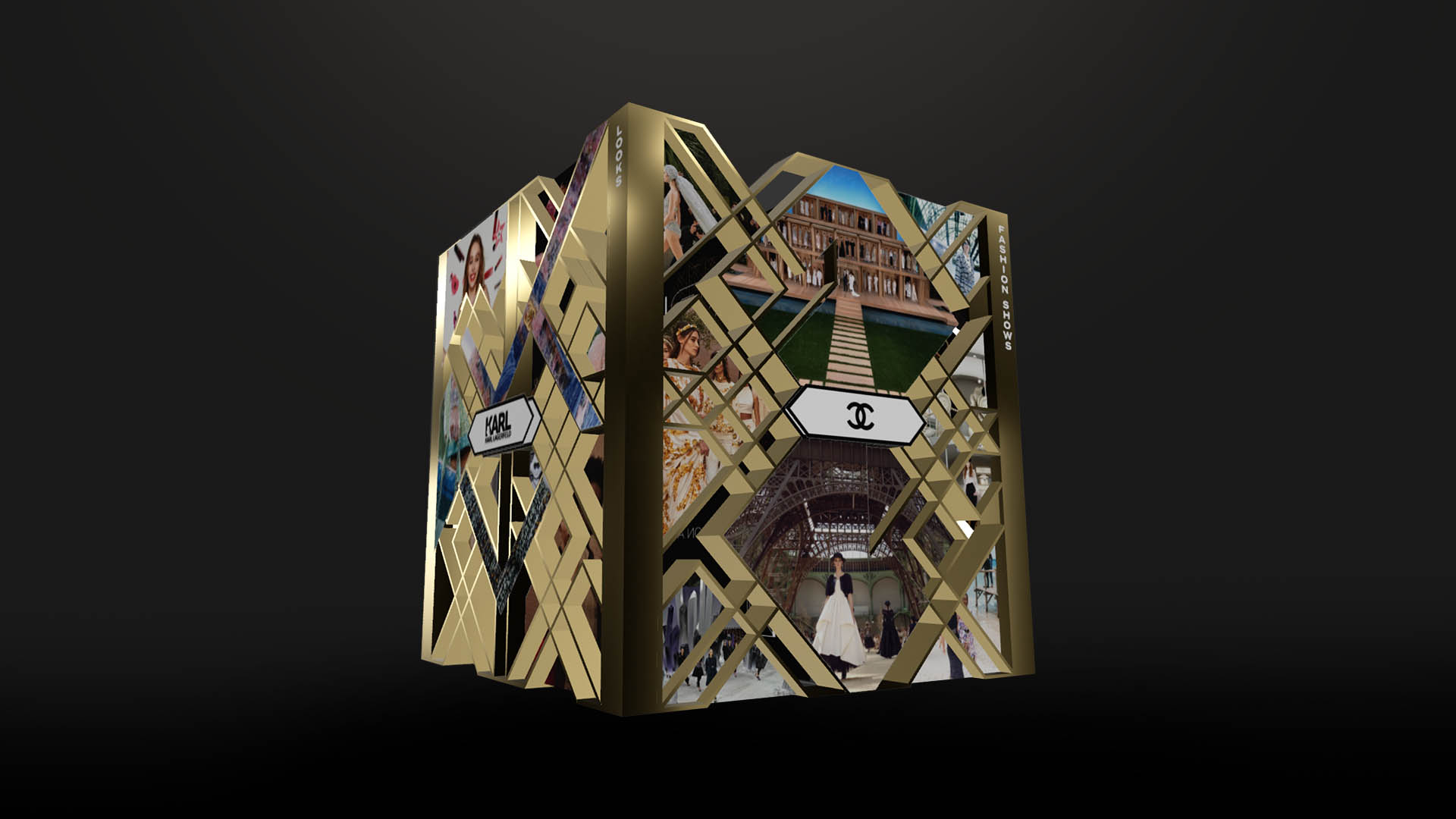 For the final part of this collection, I wanted to bring the design system I built to life. My original intention for the K grid was not only to create a structure that embodied icons of his career, but additionally mimic the process of an atelier embroidery base. It was clear that I wanted to explore 3D based motion for the first time.