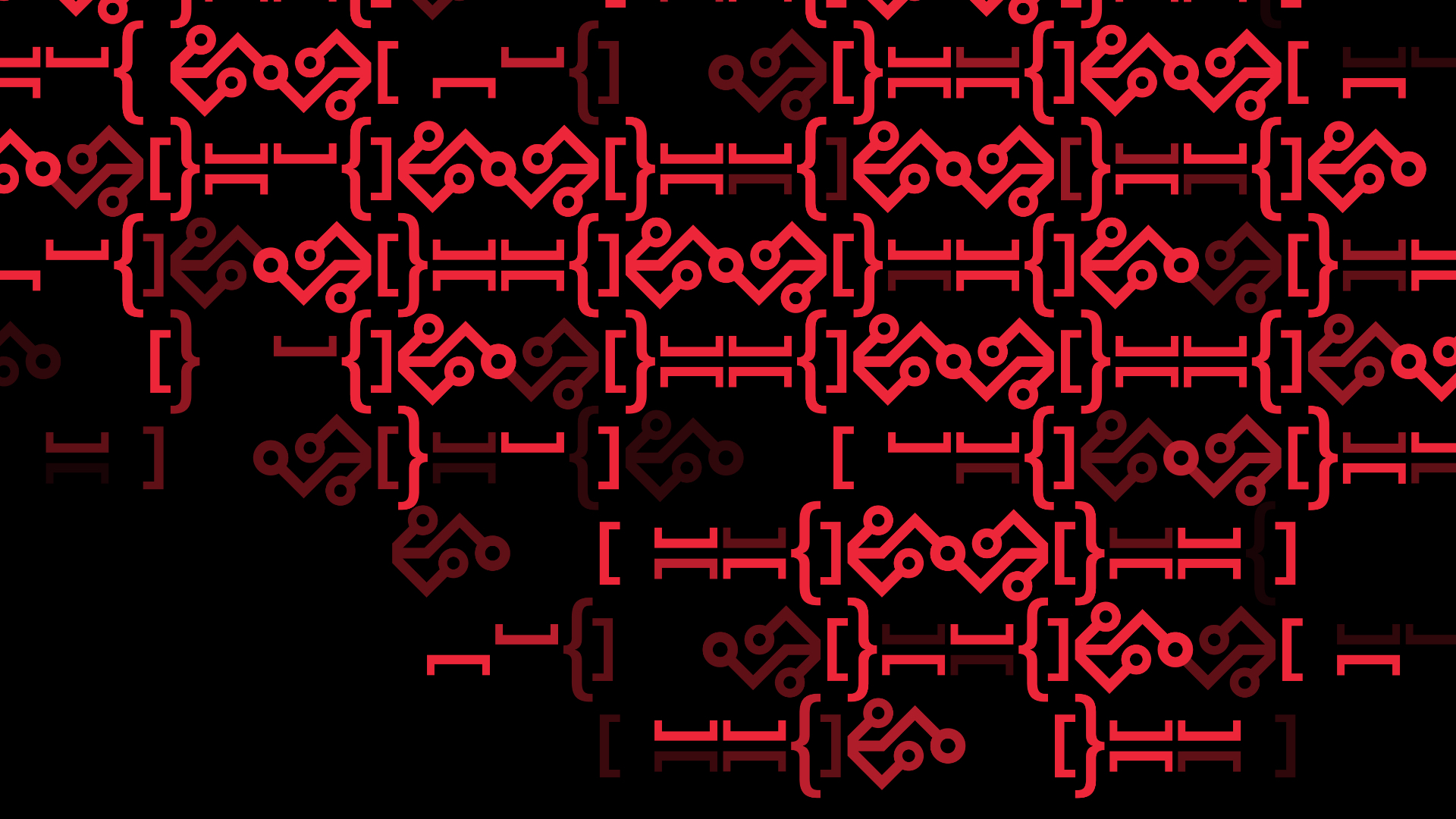 Each year, TartanHacks has its own individual design language. As the designer, I was in charge of developing an identity that could be replicated in numerous ways.

↑ Logo Evolution
The logo development process was participatory driven. With the guidance and suggestions from organizers of the Hackathon, I proposed various directions.

↑ Juxtaposition of Olympiads and Command Lines
The final logo is comprised of a torch where the base is built out of characters used in a command line. This was done to embody a more competitive spirit in the context of the upcoming olympic games. The logo also transforms into heart-shaped iconography as much of the marketing campaign revolves around the Hackathon being on valentines day.

↑ Pattern
The torch is repeated to serve as backgrounds for presentations and event banners. 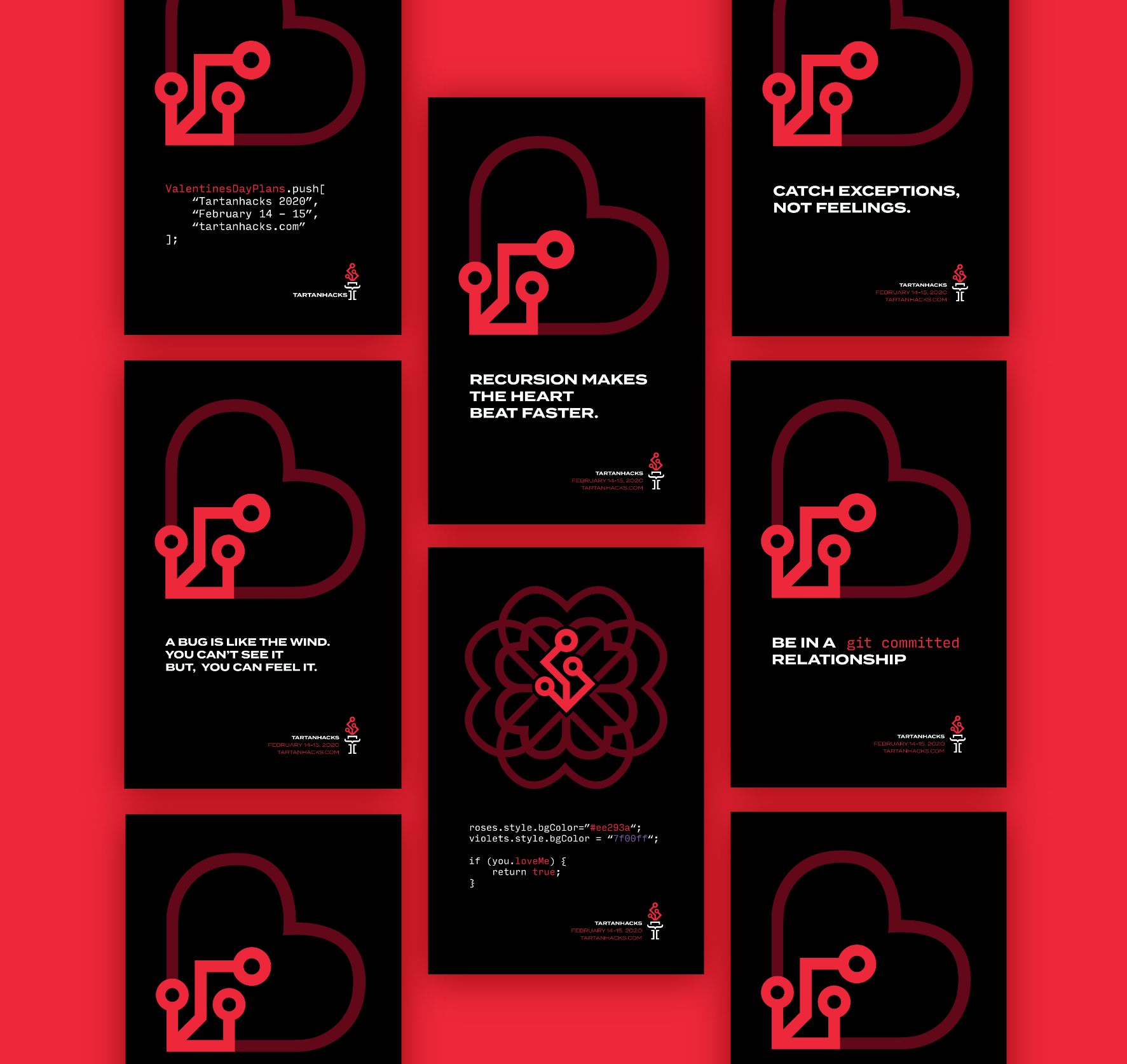 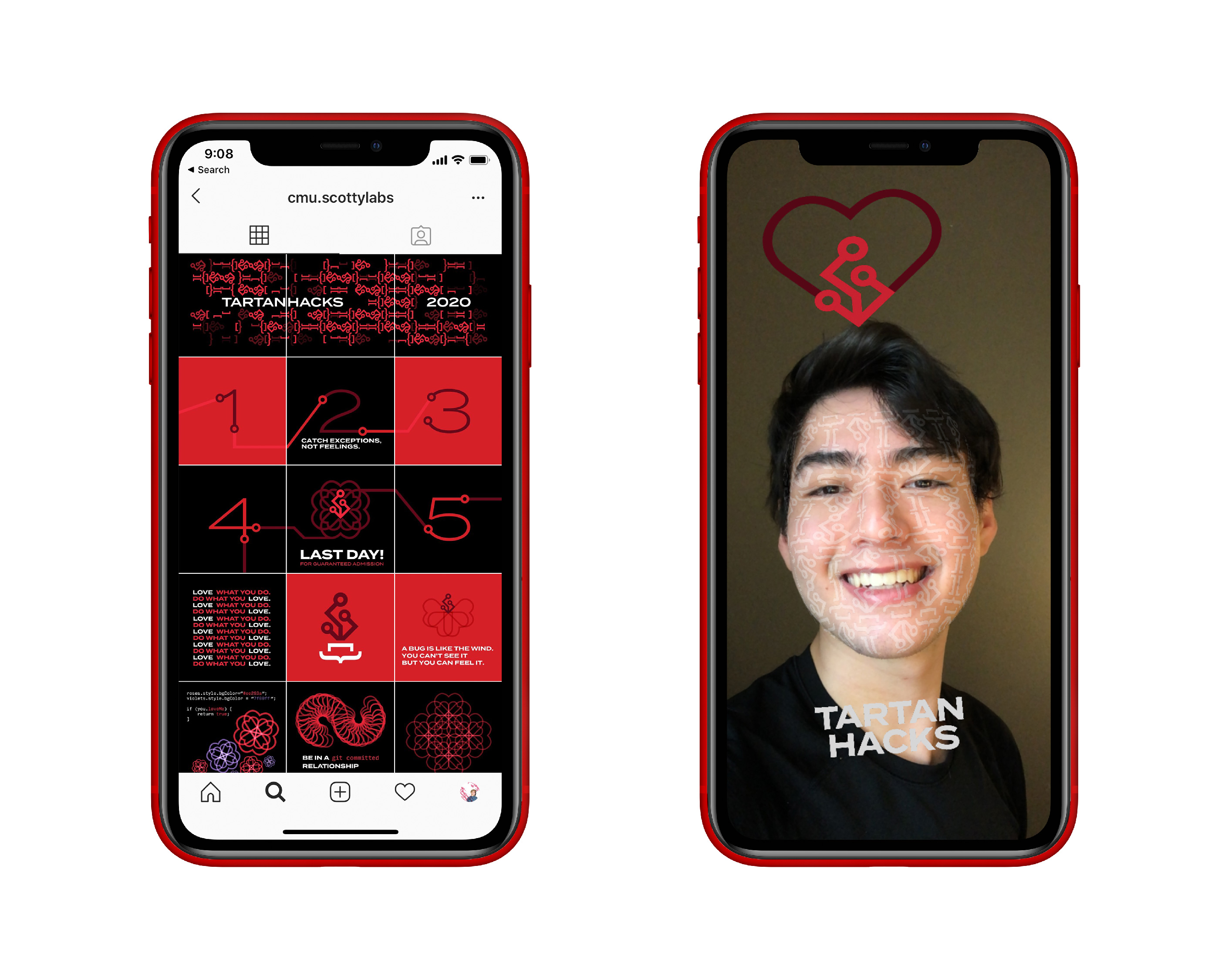 ↑ Spark AR
Before and during the event, heart shaped logo variations would be randomized once winking at the camera. 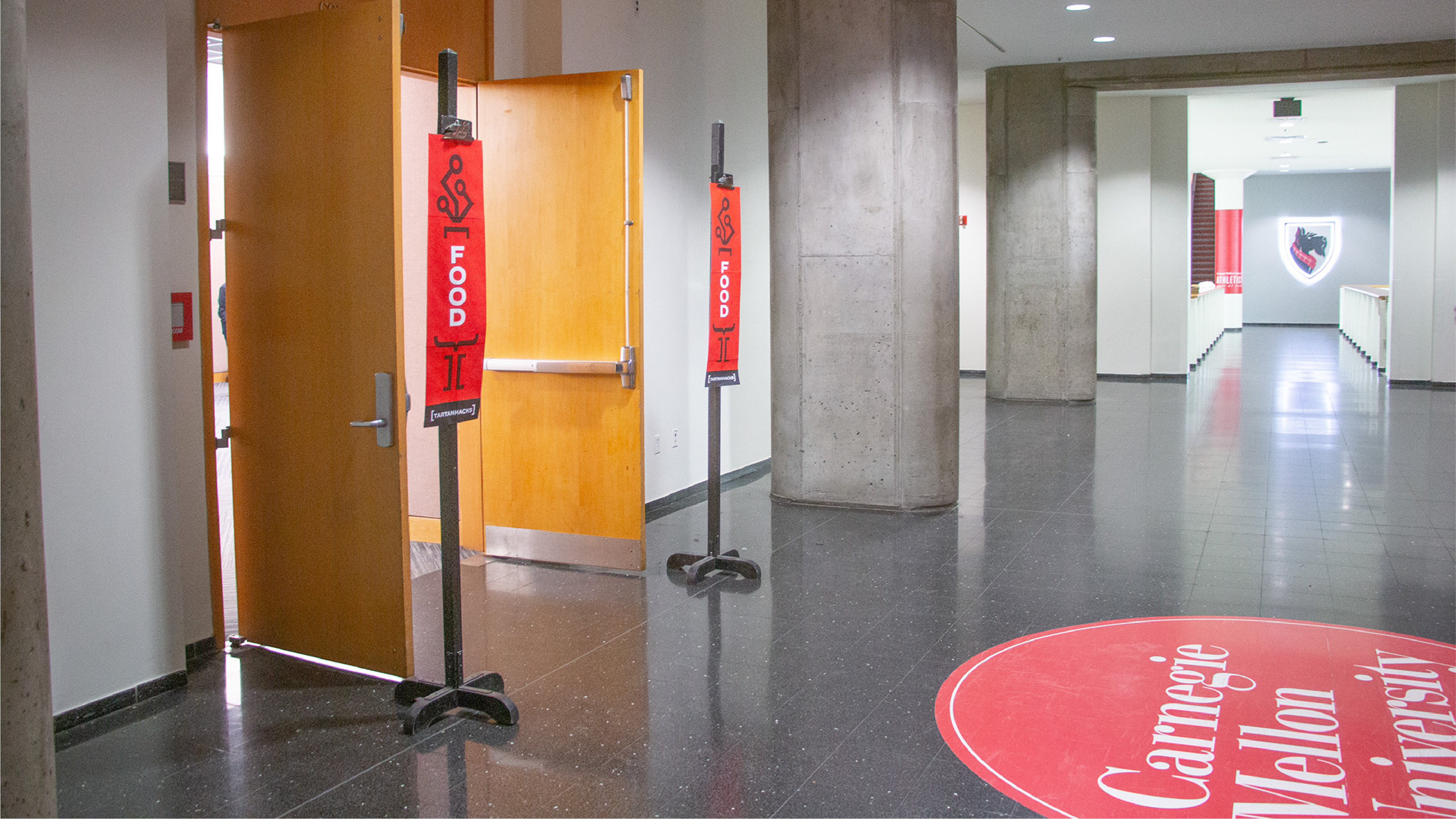 ↑ Way finding
The affordances of the logo allowed vertical text to be placed for signage.

↑ CMU's Branding Identity
When developing the environmental signage, it was important to maintain cohesion with CMU's permanent way finding designs. 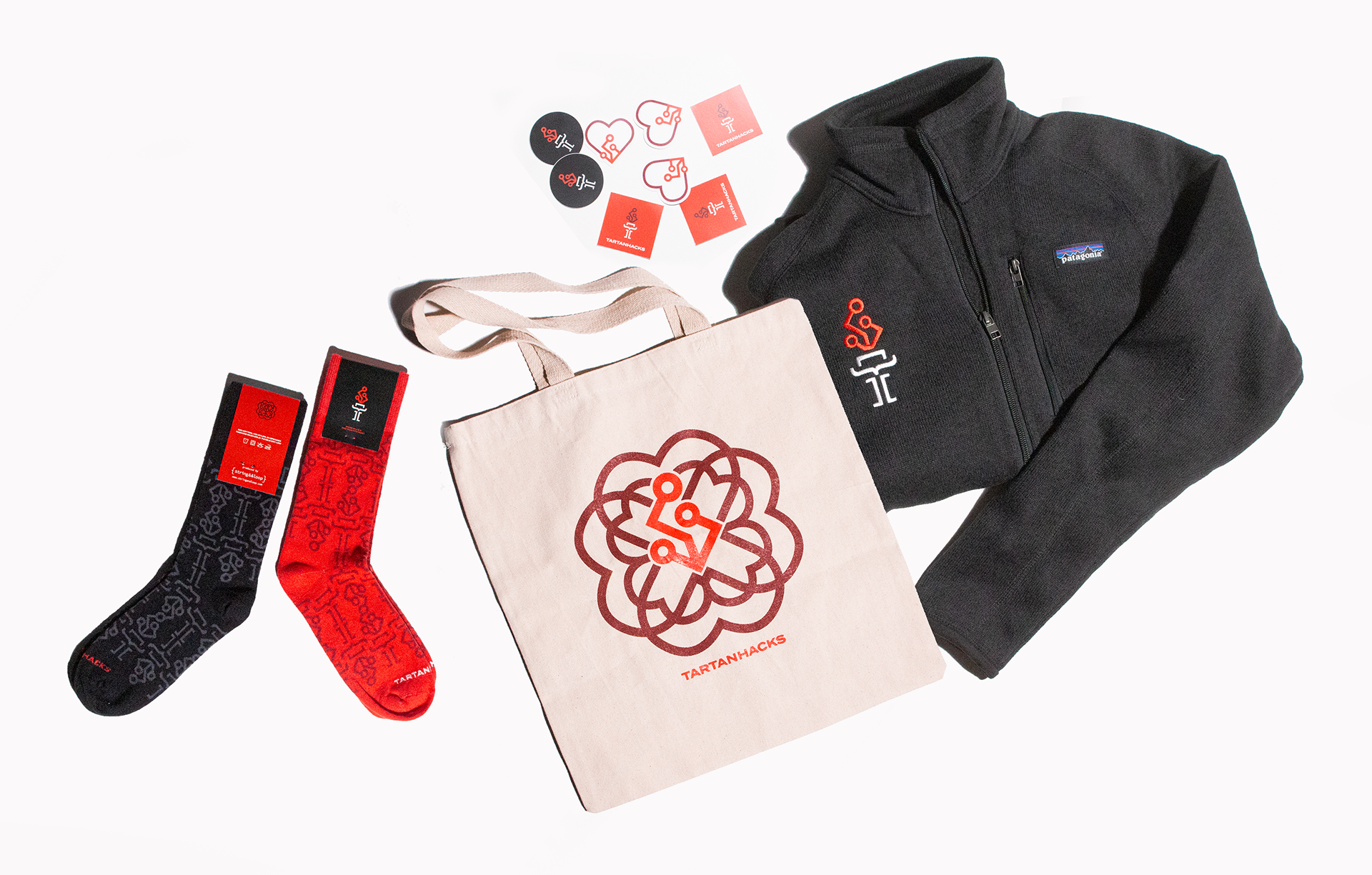 ↑ Socks
Using the tessellation torch pattern, it stays true to the identity while being usable with any winter look.

↑ Tote Bags
Paired with the rose variation of the TartanHacks logo, the bag can be used anywhere without coming off as 'an event-only tote'.

↑ T-shirts
Two variations for the shirts were made for competitors (hackers) and mentors (helping hackers with any development questions).

As I was the only person designing and regulating content, TartanHacks 2020 pushed me to make a highly efficient design system. Ultimately this constraint allowed me to develop a logo, type, and color system that could be quickly edited and sent off for production.